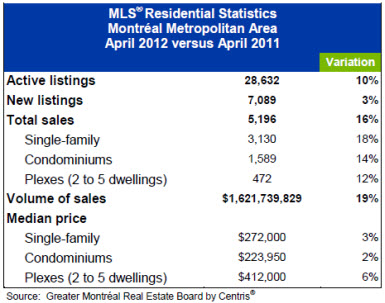 Île-des-Sœurs, May 8, 2012
Residential MLS® sales in the Montréal Census Metropolitan Area (CMA) increased by 16 per cent in April 2012 compared to April 2011

, according to the Greater Montréal Real Estate Board (GMREB). This was the eleventh consecutive monthly increase in sales, and the second best result for a month of April after the record set in 2010.

“The April 2012 increase in sales in the Montréal CMA was the largest among the province’s six metropolitan areas,” said Diane Ménard, Vice-President of the GMREB Board of Directors. “It’s thanks to the strong performance of Montréal’s suburbs that residential sales increased so dramatically compared to the same month last year,” she added.

The area of Vaudreuil-Soulanges registered a 27 per cent increase in residential sales, its best result ever for a month of April. Sales on the South Shore grew by 26 per cent, rebounding from the same month last year when sales on the South Shore posted their largest decrease.
The North Shore and Laval also registered their second best month of April, with respective sales increases of 17 and 19 per cent. Last but not least came the Island of Montréal with a very respectable 8 per cent increase in MLS® sales.

In terms of property categories, single-family homes posted the best result as sales of this property category grew by 18 per cent (3,130 transactions), followed by condominiums at 14 per cent (1,589 transactions), and plexes at 12 per cent (472 transactions). The number of active listings for the entire Montréal CMA increased by 10 per cent in April 2012 compared to April in 2011, with a total of 28,632 residential properties for sale by a real estate broker. This was the largest supply of properties available for a month of April in eight years.

If you would like to receive daily updates about real estate information, the market, resources, articles, tips and more, Join me: 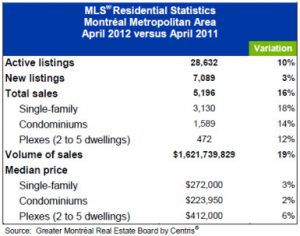