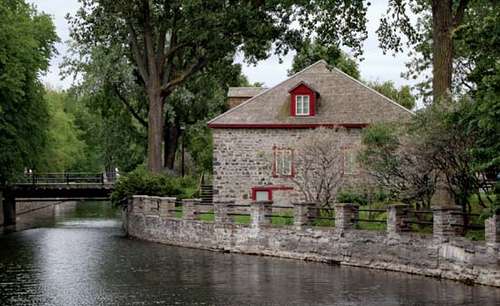 Lachine is one of the oldest pioneer villages in Canada. Rich in history and culture, it’s also rich in vintage real estate properties. You can find homes dating back to 1765. Its neighbourhoods serve as the divide between the West Island and downtown so it’s perfectly located. You can get to the center of the city within 15 minutes whether you are driving, taking the train or express bus. If you prefer a greener commute, you can get downtown within 40 minutes by biking along the famous Lachine canal.

The village is divided into three parts: Ville Saint-Pierre, Lachine East and Lachine West. Each neighbourhood has a distinct culture and style. Lachine East and West are located beside each other below Highway 20 and bordered by waterfront. Ville Saint-Pierre is on the other side of the highway. It is unique, and a very different market and community than the other two.

The history of Saint-Pierre revolves around the St Pierre River. The river offered indigenous inhabitants food security as they hunted, fished, gardened and traveled along the river. In the 19th century, the river offered waterpower for mills and tanneries, propelling Montreal’s industrial development and serving as the city’s first sewer system.

Today the main drag through the town is Rue St Jacques, which is lined with small stores and restaurants. The town is similar to Lachine East with lower income, blue collar working folks. Properties are mostly a mix of smaller homes, duplexes, triplexes, and apartment buildings.

It’s a smaller community with only about 4,600 people, which is surrounded by the highway, industrial and commercial businesses. It is also close to the industrial and commuter train line. It was a separate town until it merged with Lachine in 1999 and became the neighbourhood’s third borough.

There is one area that resides above the tracks and backs onto Montreal West, creating a divide in the market value. These homes allow you to live close to the Montreal West neighbourhood with Lachine’s lower taxes. In 2018, the median selling price for a house in Ville Saint-Pierre was $363,000.

Lachine East, or what was historically called Old Lachine, has a residential area located below Highway 20 that runs from 31st Avenue to First Avenue.

‘Dawes Brewery’ was the first official company to open up in this area in 1811. This spawned the beginning of the neighbourhood’s urban development and attracted other companies such as Hudson’s Bay, which resulted in a mix of homes, manufacturing and business areas.

Lachine East’s overall culture has always been similar to Ville St. Pierre — lower income and blue collar working folks. Properties are a mix of smaller homes, duplexes, and triplexes with many industrial, commercial buildings sprinkled in between. In 2018, the median selling price for a house was $360,000. The small buildings keep prices attractive for young families and singles getting into the real estate game.

Lachine West is situated below Highway 20, between 55th and 32nd Avenues. It’s traditionally known as the high-end part of Lachine with its array of medium to large family homes. In 2018, the median selling price in this neighbourhood was around $500,000. Lachine houses are diverse in style. Most houses were commissioned by the original homeowners and built during different time periods. The houses tend to be on large lots, normally 5000 square feet and up, with mature, overhanging trees along the street and in the nearby parks.

This area is not known for a cute village or commercial walking area but it has a main shopping mall on 32nd Avenue called Les Galeries Lachine.

Over the years, more commercial buildings have been built around this area. Greater Montreal Real Estate Board has given Lachine West a 10/10 score for schools and parks as well as high scores for greenery and daycare services. The area has a low walk score so residents tend to own cars. However if you want to go for a stroll, the waterfront has a paved path for bikers and walkers and, during the summer, many people enjoy the views by sitting and picnicking along the grassy spots.

Since the opening up of the Lachine Canal bike path and the farmer’s market in 2003, the Lachine East and West district has gone through a revival. During those years, developers have converted many of the old manufacturing buildings into condos.

Lachine is a diverse and trendy

With more people moving into the neighbourhood, businesses are following suit. There are restaurants, shops, yoga studios and family services. The area seems to evolve every month with new construction and city improvements. The region is starting to diversify and, dare I say, become trendy, making it appealing for some downtowners to take the leap and move out of the city centre.

Waterfront and heritage buildings entice people to spend their real estate dollars. Lachine’s charm will continue to grow as investors are drawn to the opportunities.

Read more of my articles on where to invest in real estate here.

This article was featured in: